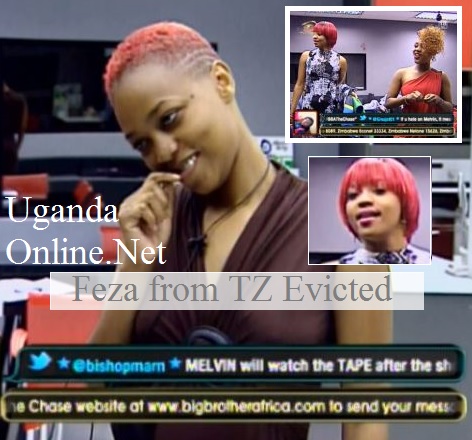 Feza from Tanzania was the only hope for East Africa but day 77 marked the end of her game. Fellow countrymate, Nando did not get a chance to shout out to Africa on the Big Brother stage after he was disqualified for breaching the Big Brother rules. This week had only Big Brother girls up for eviction but Tanzania's Feza could not pull through.

Dilish took the day home with seven country votes while Cleo and Feza both had four country votes. The tie breaker rules were applied. Botswana joined the three East African countries in voting for Feza but it was still not enough to keep Feza in the house. Her love for Oneal was not lost as Botswana reciprocated with their votes.

Feza has left behind seven housemates that include: Beverly and Melvin from Nigeria, Bimp from Ethiopia, Elikem from Ghana, Dilish from Namibia, Cleo from Zambia and Rasta Angelo from South Africa. Beverly and Angelo or call them Bengelo are the only lovers left in the house and for some reason, Africa has always had issues with lovers, so you can as well take these two off the grand prize.

Elikem has already crossed over to the line up of finalists now that he is this week's HoH. On Monday, we will who else is up for eviction. Meanwhile, Feza's love for Oneal is real. In the last one week when Oneal was out of the house, Feza's heart was beating for Oneal. She even confirmed this when IK asked her if she loved the dude from Botswana, she said YESSS!