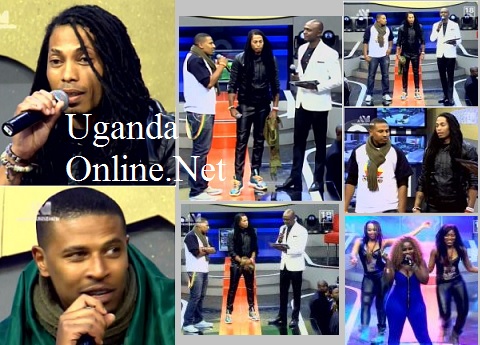 Africa has spoken and when it does, a housemate drops. Yesterday, Ethiopia's Bimp and South Africa's Angelo were the victims marking an end to their game in the Big Brother The Chase. Dilish, Angelo (SA) and Bimp (ET) were the housemates up for eviction.  Dilish garnered 7 country votes surviving the chop as the rest got 4 each leading to their eviction.

While on the Live Show stage, IK showed Angelo his clip summary of how he wanted to have a piece of different Big Brother girls starting with Kenya's Huddah and Annabel, Fatima, Big Momma and finally Beverly. The Rasta Man from South Africa responded that: "I was just chasing my feelings. It's important to follow your feelings." Hmm he almost showed Ghana's Kaakie the same while on stage.

Ethiopia's Bimp was standing next to his 'rival', Angelo who interestingly was one of those who had nominated him, but there they were, out on the same day. Biggie played back a clip of Beverly mounting Bimp in the Jacuzzi and Angelo was asked how it feels, but to this he said, "I will beat him(Bimp) after the show."

In the house, Beverly was sobbing throughout the night as she could not believe that her lover Angelo as she fondly calls him had left without bidding farewell. Bigge told Angelo to head straight out to the exit door and not back to the house.

The top five or the finalists for the chase are; Ghana's Elikem, who was the first finalist and also the first Ghanaian to come this far, Melvin and Beverly from Nigeria but since Angelo left, Beverly stands no chance on this one. Its important to note that Beverly is the only housemate who has never been nominated in the history of Big Brother and also the number one entertainer when it came to the Big Brother game.

The other two finalists are Cleo from Zambia and Delicious Dilish Matthews from Namibia.

It's six days to the end of the show, who do you think is taking this one?