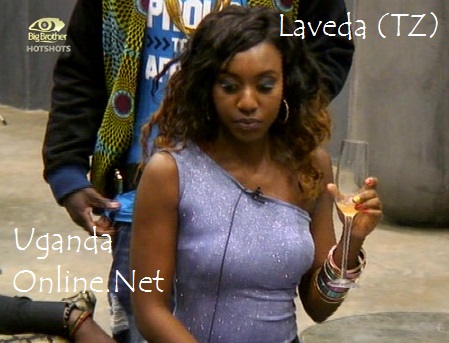 More of the 26 housemates made their way to the house after their talent show performances.

Mam' Bea from Ghana scored 72.5% by just show casing her fashion design in a sari like attire followed by our very own Stella Nantumbwe aka Ellah who did a Mama song but got 54.6% from her performance, again an average score though better than Esther.

Goitse from Botswana followed with a 64.2% score after her unique dance. Alusa from Kenya hit the stage next with his Swahili-Lingala song that earned him a cool 61%. He was in the Emerald house last year. Samantha doing a song that she did specifically for Big Brother got the audience that was supposed to be voting her clapping, it worked because she got 61%.

The lady of the night, Laveda from Tanzania followed playing her saxophone, which turned out to be the most appealing. She scored 85%. IK rated her as the sexi3st on the show. She was clad in a long slit dress.

Then came the comedian from Rwanda who warned girls from following their boyfriends to the ATM machines, he got 77.5% for that. 21-year-old Sheillah from Botswana followed with a performance that left her with 59.3%, Malawi's Sipe followed with a 59%.

Luis from Namibia came with his Champion song blending it with his six pack, it earned him 58.3%, Zambia's Macky 2 followed with a 59.1%

Mira from Mozambique hit the stage doing a poem entitled Mama Africa, she got 47.8% for it. Idris, the photographer from Tanzania was up next dancing to the sounds of Waichukucha garnering him a cool 64%..He was dressed like Michael Jackson.

It was then time for the BET Award winner, Davido doing his Skelewu hit song. At the end of the performances, Biggie told all the housemates that they were up for eviction apart from Laveda, whose score was the highest, making her the head of house and therefore immune from eviction this week.