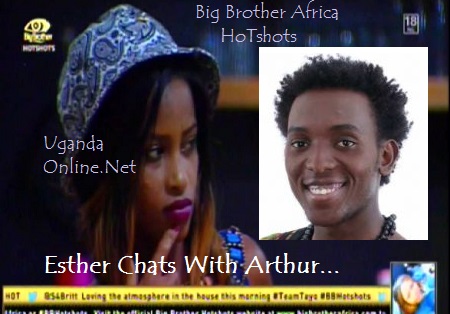 Rwanda's Hotshot, Arthur Nkusi is half Ugandan. This was revealed this morning while chatting with Uganda's Esther Akankwasa.

The Rwanda comedian did not forget fellow comedians, The Amarula family who he says were his classmates. I'm still hurt with the death of Paddy Bitama, he added.

As the conversation progressed, another Rwandan housemate, Frankie who was following closely chipped in with Juliana who lost her only son, Keron but was also quick to add that Moze Radio and Weasel were his favorite Ugandan stars.

At this rate, Uganda's Esther and Ellah risk losing some of their votes to these lads who seem to be on point with their game.

Meanwhile, Esther was this afternoon complaining to Biggie that he needs to reduce on the South Africa and Nigerian Music being played in the house and switch to a bit of Ugandan music. She spent the whole Independence day wrapped up in a Ugandan flag as her way of celebrating 52 years of  independence.

She is looking forward to being the next Head of House (HoH).