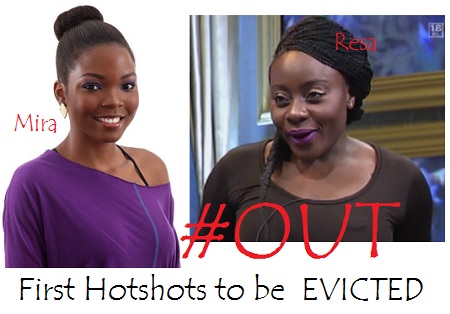 Big Brother Hotshots first eviction was held this evening and unfortunately, Zambia's Resa and Mozambique's Mira will have to watch the game from their respective homes.

"It's been an amazing journey and I'm at peace, " Resa told IK. The second housemate to be evicted was Mira who said that she was happy to be out of the house as she was missing her family and phone.

Back in the house, Namibia's Luis is already missing Mira and can't help tears from rolling down his cheeks. Kenya's Sabina was seen comforting him. It should be recalled that after the party yesterday, Luis and Mira took it to another level. Biggie's cameras zoomed on them and it was all going down.

Hmmm THAT explains the tears Luis was shedding because he had only gotten to know her better, but he might have to play his cards elsewhere...!

"I got close to Luis from Namibia, he is a fine guy, " Mira added during the live eviction show. Africa is good at evicting couples while housemates tend to use it as a strategy to stay in the house.

This week, Uganda's Ellah survives eviction while Esther and other members she performed with in the music extravaganza are form part of the list for eviction next week.