Esther and Ellah Make It to the Second Week
Monday, October 13 2014 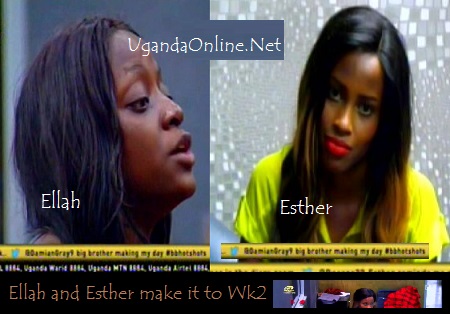 Yes this is news considering that last year, Denzel was evicted just after seven days and in the second week, LK4 followed. This year, Uganda's female housemates have done better than that not forgetting that it's a shorter version following the fire that gutted the Big Brother House. This season will be for 63 days as opposed to the usual 91 days.

Yesterday, Ellah survived by a whisker as she was among the 12 housemates who did not get any vote from Africa. In the end, Resa and Mira were struck off the Big Brother girls list after falling on the wrong side of Africa. Mozambique and Zambia now have one housemate each.

It's good news for Team Ellah as she is safe this week. Stella Nantumbwe aka Ellah is part of the Waka Waka group that won the Music Extravaganza task making them immune from eviction this week.

On the other hand, Esther Akankwasa is in the group that lost and they will comprise part of the list of nominees for possible eviction next Sunday.

The final list is expected today after the Head of House, South Africa's Samantha playing her save and replace role. To vote for Ellah or Esther, type 'Vote Esther' or 'Vote Ellah' and send the sms text to 8884. Each message costs shs500/-.