Uganda's Esther and Ellah Up for Eviction
Monday, October 13 2014 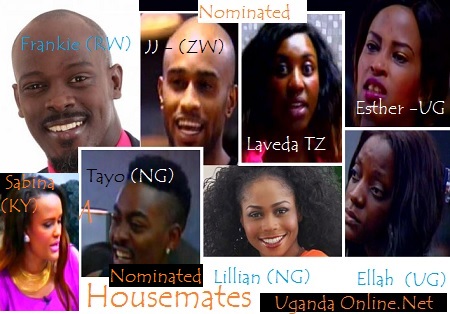 Esther and Ellah will this week have to face Africa. Last week all housemates apart from the Head of House were up for eviction. Africa saved some but Ellah was not among those saved as she was in the batch of 12 housemates who did not get a vote from Africa.

Two of the 12, Resa and Mira went home. Biggie then announced that housemates from the Waka Waka team that won the Extravaganza music show of which Ellah was among were immune from eviction. This got Ellah more excited as she danced around the house and hugged fellow housemates on learning that she was safe for another week.

Esther was already on the chopping block for this week after garnering 5 votes together with Rwanda's Frankie, Zimbabwe's JJ, Tanzania's Laveda, Kenya's Sabina, Nigeria's Lillian and Tayo.

Samantha from South Africa is the current Head of House, she was called in to exercise her role as Head of House (which is to add one housemate who is not nominated on the list) and that was our very own Ellah unfortunately.

According to Biggie, one housemate will have to pack their bags next Sunday. This is a tricky position for Uganda because with two housemates from the same country being up, Uganda will only save one housemate. Our neighbors, Kenya, Tanzania and Rwanda have all been nominated, so they have their housemates to save other than voting for Uganda.