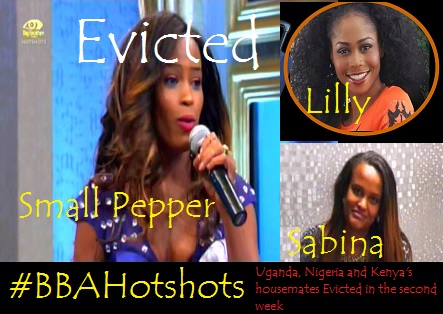 Uganda's Esther, Nigeria's Lillian and Kenya's Sabina are the latest housemates to be evicted from the Big Brother House. Nigeria's twe#king queen and Uganda's queen dancer were evicted during the live show this Sunday.

I'm all good, said Lillian while Esther said that she was okay with whatever Africa decided. It's not surprising that these two were out now that (Esther and Ellah) from Uganda, ( Tayo and Lillian) from Nigeria were all up for eviction.

The show then crossed to highlights for the housemate who loves twe#king, Lillian, but looks like Africa did not buy her strategy much as IK told her that in the history of Big Brother, she is the only housemate who twe#ks but this did very little in saving her. Lillian went on to rap during the live show.

Then the beautiful one from Uganda was showed her highlights in the house which were more of her dancing for Biggie. IK asked her about the Nigerian housemate, she said; "Tayo is my friend for ever please". Small but dangerous IK said, she replied Small Pepper baby.

Highlights of Esther doing We found love, dancing for Biggie, and The Biggie Twe#k were Esther's highlights. She stayed in the house for only two weeks.

The rate at which Africa is evicting female housemates is getting very scary. The house now has 13 male housemates and 8 female. Zambia, Mozambique, Kenya, Uganda and Nigeria have all lost a housemate and now have just one representative. Should anything happen next week to any of these countries, it will be the end of the game.