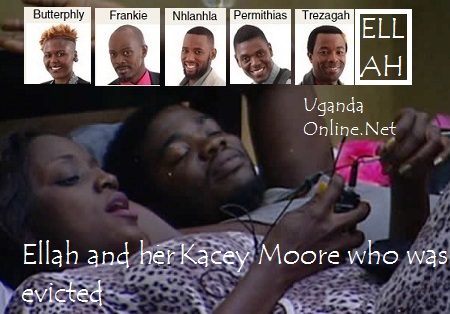 Stella Nantumbwe aka Ellah has been up for eviction again n again n again but somehow, she pulls through, It's now left to be seen if she will survive this Sunday. She is up for eviction together with Butterphly (Zimbabwe), Frankie (Rwanda), Nhlanhla (South Africa), Permithias (Namibia) and Trezagah from Mozambique.

Butterphly is not aware that she is up for eviction, she will know on the eviction day as she was a victim of the Head of House move that requires that he/she adds a housemate on the chopping block.

Last Sunday, Rwanda's Arthur was evicted. Shortly after, Biggie decided it was a tripple eviction and two more housemates, Kacey Moore and Luis from Ghana and Namibia respectively were sent packing.

Ellah had become so close to Kacey Moore, a married man, but she wasn't bothered a single bit. Miss Uganda 2013 cried for several hours after Kacey had been evicted. In the nomination session that followed after the Sunday live evictions, some housemates nominated Ellah for behaving as though she was Kacey More's lover and yet he is a married man.

I'm sure by now Kacey Moore is busy explaining to the wife why he was cuddling with one of the beauty queens from Uganda.

In the Big Brother House, housemates only reduce to the last man standing as opposed to increasing, Ellah has since moved on and now she is making life very difficult for Goitse. She is 'very' close to Tanzania's Idris. In fact, yesterday, Idris was busy massaging her a moment she loved based on the sounds she was making. 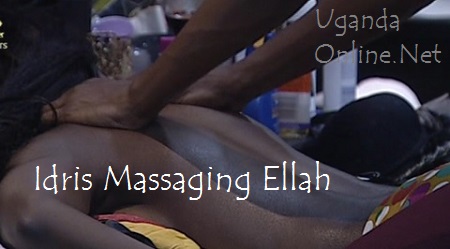