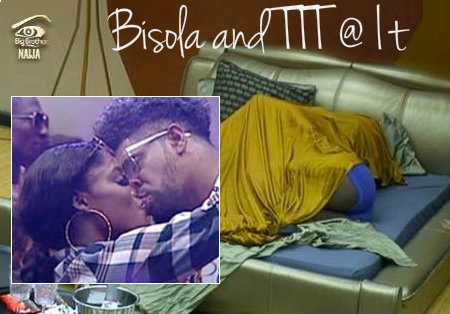 The Saturday party was on and the housemates had fun enjoying their lager, music and chicken. Thin Tall Tony and Marvis were pretty much aware they were up for eviction so they danced to the fullest, k!ssed everytime they felt like and with whoever they chose.

After the party, the housemates rushed indoors just to get ready for the now tradional Truth or Dare game, but unfortunately for them, Biggie had hidden all they beer so they had nothing to keep them going with the game that lets them do all the crazy things they can think of.

Motormouthed Bisola and Thin Tall Tony excused themselves and went to do a bit of exploring each other for some good minutes. The camera's were able to grab them for some time with Bisola doing her thing as T3 made groaning sounds.

They [Bisola and TTT] later came to join the other housemates at the usual table that normally acts as a playground for the trutH or dare game..

The Jacuzzi was now accessible and the sharp one's were quick to rush in, seconds within the hot tub, Bisola jumped on Thin Tall Tony and started feasting on his lips..

"Biggie I hope you are watching..You see us going in a very sad move...Biggie we are sad, Nigger you've spoilt our fun..."Thin Tall Tony said.

"I feel so sad I feel like we've offended Big Brother," TBoss added.

The housemates later gathered and played the confession game.