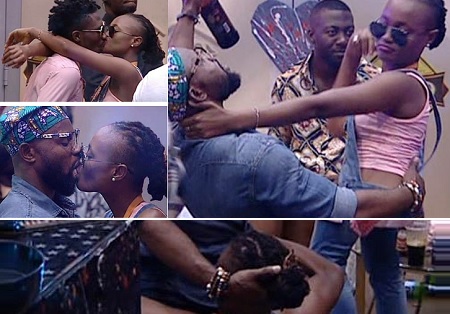 Three housemates are up for eviction this week, Thin Tall Tony, Marvis and Gifty, and tonight, we will see at least one of them leave the Big Brother house. Marvis has been appealing to her fans letting them know that she does not want to leave the house, will they deliver? tune in on Ch 198 on DSTV to see how she will react when evicted.

Yesterday was the denim party so all the housemates pulled out their denim shorts and trousers and the party was on. Marvis was always caught in compromising situations all the time, if she was not dancing wide spread, she was feasting on either Kemen's or Efe's lips.

Matters were made worse after the party when Big Brother hid their liquor, Marvis cried all the way because she was hoping to put up the best show after clearing her throat with some legend bottles, but Biggie was not in the party mood.

Marvis later confided in Efe before breaking down in tears. Bisola and Thin Tall Tony came around to comfort her but the tiny dreadlocked housemate could not hold back her tears.

Thin Tall Tony told her that he was also up for eviction but even if he left the house tonight, he is now a more popular figure out there than he came into the house, most doors will be open for him without having to introduce himself.

Tonight, Gifty, Thin Tall Tony and Marvis will find out who has that much love from Africa.