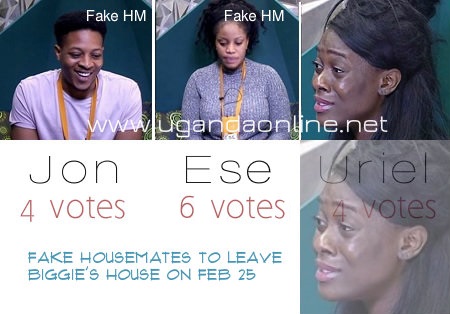 Yesterday, all the housemates were busy nominating their strongest challengers for possible eviction and at the end of the exercise, the fake housemates, Efe and Jon, were leading which is proof that they are doing a good job. Efe had 6 and Jon 4. Uriel had 4 votes making her the legitimate housemate with the highest votes.

Fortunately for her, all the other housemates; Bally, Efe, Bassey and TBoss followed with just two votes each.

In principal, Uriel was to be up with herself because Efe and Jon who also had high votes were not in the game for the money, and that in itself could not work out leaving Biggie with no choice but to nullify the nominations.

Trust Biggie, having failed to come up with a proper nominee list, he used Kemen and Marvis to let all the housemates know that it was not business as usual this week, all their efforts to nominate had been put to waste, instead, Biggie and the viewers will be the ones to nominate housemates that will be on the chopping block this week.

As part of the Big Brother rules, housemates are not allowed to conspire and that is the crime Kemen committed while talking to Marvis.

This brought a lot of panic in the house, Balley lost his advantage card and so was Bisola who was equally immune to being nominated this week, all because of Kemen's actions. Kemen is the first Head of House to be slapped with a striker.

Biggie noticed how tense the housemates were and very quickly called in one by one for their diary sessions, it was then that he notified them that not all of them were up for eviction.

Next Sunday will see the fake housemates, Ese and Jon leave the house as the housemates are pretty much aware these two are in the game.