Marvis and Efe an Item after the wedding task
Sunday, March 12 2017 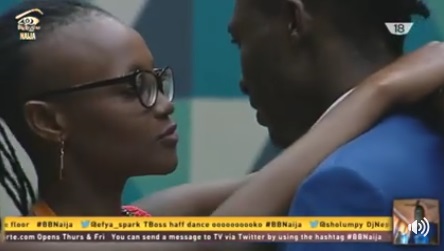 Marvis and Efe an Item after the wedding task

Housemates had a Marvis-Efe wedding in the Big Brother Naija house but for three days now, the two are behaving like newly weds...It was a task but the housemates with a strong Naija accent seem to be taking it to a whole new level.

During the Saturday night party, the two danced together most of the time and when it got to bed time, Efe went to bed with Marvis..His hand was seen doing several rounds under the duvet as Tboss wore a beaming smile next to them.

The Based on Logistics star soon demanded for a good night kiss and hug which Marvis gave freely..Efe then left her in the giant bed all by herself.

Efe then had a chat with Debbie-Rise who clearly told him she was tipsy, he escorted her to upstairs before kissing her goodnight...oh he also covered her before heading to his bed...

On his way to bed, Efe met Bassey playing the guitar all by himself and wondered why he was not sleeping at the time, he left him and dashed to his single bed next to Thin Tall Tony who was busy snoring as Bally feasted on his Bisola.