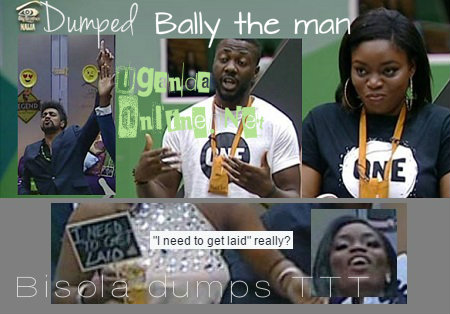 Bisola and Bally crowned off the night with a deep kiss in one of the corners as the rest of the housemates snored including Thin Tall Tony. The kiss was not enough as they wanted to explore each other, Bisola moved to Bally's bed where they were safely covered in a duvet.

They kicked off with the Big Brother game as Biggie's roving camera's went for Thin Tall Tony (TTT) who was at the time snoring and dreaming of his family back at home.

It should be recalled that Bally has been very careful with crossing the line but this was not possible this time as Bisola feasted on him. Bisola left Bally's bed after having it all and the two promised each other that whatever happened should not happen going forward.

Housemates have been very careful when it comes to matters of crossing the line since the disqualification of Kemen whose hands were caught on camera surfing TBoss without her consent, it was a serious matter that took a whole day's workshop on Women's day just to teach the housemates on matters consent.

There will be no one going home tonight of the eight housemates still in the game.. TBoss, Bisola, Debbie-Rise, Marvis, Efe, TTT, Bally and Bassey are the only housemates in the game that will see the winner walk away with 25 naira and an SUV ride..