Thin Tall Tony's game has ended in the Big Brother Naija house after he became the latest housemate to be evicted. He leaves behind seven finalists.

Bisola could not help tears from rolling down her cheeks when they mentioned that her bae had been evicted.

While on stage, TTT told the show host that whatever happened between him and Bisola in the house was not real.

"Bisola is an amazing person and a friend I will keep for life but what happened in the house was not real.."

The based on logistics star, Efe, is unstoppable as he again emerged the winner out of the housemates who were up for possible eviction. Efe garnered 50% of the total vote followed by Debbie-Rise who got 21% and TBoss 14%.

Before the show could end, Biggie came up with a game changer which was to blow up hundreds of balloons using their armpits, then buttocks and later their hands, Efe emerged the winner becoming the Ultimate Head of House. 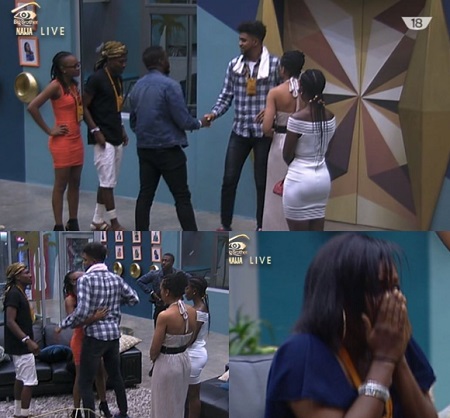