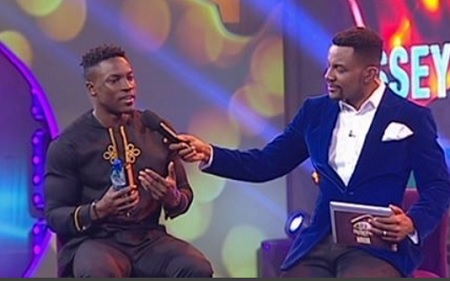 Bally, Bassey, Debbie-Rise and TBoss were the housemates up for eviction this week but unfortunately, Bassey did not make it.

Debbie-Rise was the first one to be called only to breath a sigh of relief when the show host, Ebuka, told her she was safe. "I feel bad that I've left the game but I'm also excited I've come this far," Bassey told Africa.

The toughest part for him in the house was dealing with emotions especially the ladies who wanted to be close to him, but he was glad he fought all that.

In the house, Debbie-Rise was all in tears because her 'prince charming' had been evicted. They showed his clip in the house with Debbie Rise planting a good night kiss on his lips. Trust Bassey, this was his response; "I was half asleep when Debbie-Rise pecked me..."

One of the fans asked him who he liked between Uriel and Debbie, Bassey said he liked Debbie Rise, however, he has a girl friend outside the house breaking the hears of Debbie Rise fans. Bassey's dream of earning the 25 naira and an SUV has ended but says he will continue with his music.

"But seriously I would have prefered Bally to leave! Instead of Bassey... Bassey is more useful than Bally but I know why he's out! because he always nominates Efe!! So Efe fans now saved Bally instead of him," one commented.

Six housemates are left in the house and there's a game changer, housemates can now discuss who they put up for eviction. It should be recalled that in the past, they were not allowed to discuss this bit..so Africa should look out for how the game revolves in these last two weeks..