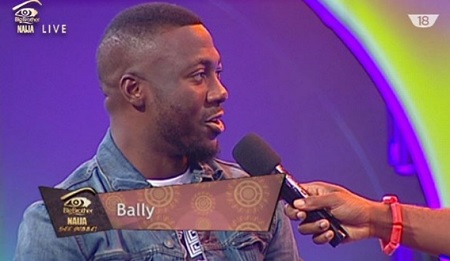 Yesterday's eviction show was the most tense from the time the show started. Housemates who were up for eviction were clearly seen panting, it was even worse for TBoss who kept going to the wash room or get a refreshment every time the show switched to an ad break.

It was a tight race this week that saw over 11 million votes but TBoss came out as the darling of many when she garnered 26.49% of the vote clinging to the top, another darling, Debbie-Rise followed in that order with 25.36%. Marvis was not very far with 24.40% but unfortunately, Bally, who was last week's top housemate became the last with 23.76%.

That is how he was evicted. Highlights of his time in the house focused on him and Bisola, but he came out clearly to say that he had no feelings for Bisola, I was only a victim just like Thin Tall Tony.

Next Sunday will see the overall winner walk away with the grand prize SUV car and 25 million naira. The game is between Efe and TBoss.