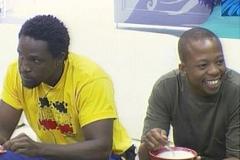 In week one Morris was up for eviction but luck was on his side because those were fake evictions in which he faced the exit fever with Thami from South Africa. However in week 2 Morris ended up nominating Thami for eviction something which made some fans conclude that probably Morris has not yet learnt the names of the housemates. Morris told Thami after the fake evictions that " We are brothers, Let's do our thing man,'' and how could Morris nominate Thami in the end?

He could have nominated any other housemate as opposed to Thami. Big brother asked Morris why he had nominated Thami and the Ugandan housemate had no reason to make matters worse. This is going to put Morris in trouble with South Africa because anyway there is no better way of rewarding him than showing him the exit.

His second nomination was Sheila from Kenya not much a surprise because he was exercising his right given the information he received from the preview of the housemates who put him up for the fake eviction. Sheila said Morris does not fit in the house. Kenya will be on Mugisha's case once he is up for eviction.

The first choice is going to cost Morris and his chances of surviving are very minimal the moment he is nominated for eviction because the fake eviction was supposed to be used to his advantage but it has instead caused him more problems.

Also: Read about Latoya in the Diary Room on how she is confirming Ricco as the perfect man and no mention of Morris anywhere in her BBA3 Plans. She is also trying to prove to her Dad that despite not knowing Maths she can still dance Salsa and wishes her Dad was watching.