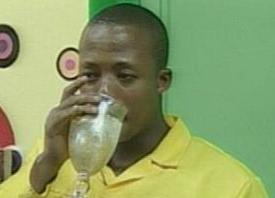 Thami Attacks TK
The South African Housemate took a glass of Vodka and within minutes it had driven him nuts. He crossed to TK and accused him of buying chocolates and potato chips as opposed to booze. ''How can you buy chocolates and potato chips asked'' is what Thami asked TK for over an hour. He repeated the same question over and over again but TK tactfully played it cool as he was aware the guy was under the influence of booze..

Thami Attacks Uti
When the South African Housemate is done with TK he very quickly crosses to Uti and this almost turns into a nasty fight but just because Africa is watching they keep it gangster. Thami teases Uti for failing to talk to Lucille while she was still in the house. The moment Lucille is evicted that is when Uti expresses his feelings for Lucille by breaking items in the house. Thami was calling Uti not man enough and even branding the ''young boy'' Munya better because he made his intentions known to Lucille.

Uti Retaliates
Uti feeling the pinch he resorts to Thami's dental formula which he claimed was scaring Hazel away. Thami had earlier made his feelings clear to Hazel but the issue of a two months affair or long distance love for that case was a turn off for HAZEL. Uti continuously made fun of Uti's teeth and his argument was; much as he came out of the shell and told HAZEL what was on his heart, Hazel was being scared by his teeth.

The fight between the two went on for sometime that even She-K (Sheila and TK) who were sleeping then could not concentrate due to the noise from these two guys. They all came to the lounge and enjoyed the free drama. Tawana sat on Uti pleading that Uti should not raise his voice now that Thami was drunk.