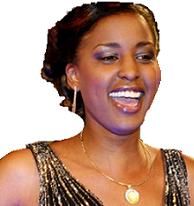 We told you and indeed Africa agreed with us. Sheila was to go if you can follow our earlier posting here. On leaving the house she was asking why Africa had voted her out! Girl that was the last question you you were to ask. Do you remember the first time you were up for eviction and later saved how you thanked Africa! There is a word you said that I cannot repeat on these pages which is exactly why you left.

Sheila is lazy and she also confirmed she is..so KB asks her who did you expect to take care of your stuff? and she is like Dude I didn't come to the house to work like .... Now it is amazing how predictable it was from the point Sheila was up for eviction that she was going.

Ricco seems to be aware that he could win the game. The moment Morris revealed his decision and it turned out that TK was replaced by Ricco, the gangster kid just clapped and indeed kept it gangster, hugged Morris and off he went to pack his luggage.

Hazel got 1 vote, Ricco got 0 votes and Tawana 2 votes. The KENYAN got 10 votes that saw her out of BBA3. When KB was announcing, he started with Hazel. ''Hazel you are safe'' said KB as Hazel was seen smiling back to the main house, and next was Ricco who went back to the house confidently as expected.

Tawana and Sheila were pushed to the glass house. The crowd was asked who do you think is leaving and the name Sheila was more heard than Tawana. The next housemate to leave the Big Brother house is ....Sheila.