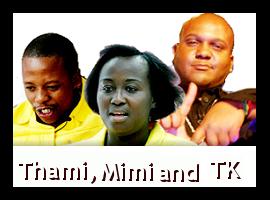 The going is not easy for TK. His girl friend who confirmed that she cannot move out with TK outside big brother house was evicted on 12.Oct.2008 and on 13.Oct.2008 TK is up for eviction. The advantage is the game is between TK and Mimi. This is the only chance Africa has landed on Mimi whose hobby is to gossip and I'm afraid Africa might not spare Mimi.

TK over cried after Sheila had left the house and now whether those were real tears or crocodile tears we can reserve that for another day but at least the giant cried for Sheila. Back to the nominations:

Apart from Thami who nominated himself and Morris who nominated the housemate he had saved the last round, here are the nominations in detail.

TK and Thami are doing very badly from just the first three nominations. Morris nominated Mimi simply because she has not been in the glass house before.

That is exactly how Thami, Mimi and TK are handed to Africa to deal with. It is day 50 and Mimi had never been up for eviction but this time around Africa has got her. TK can always come up because even Morris is aware, that is why in the week that went with Sheila, the Kenyan housemate, Morris had swapped TK with the gangster kid who is working slowly but sure to the USD 100,000.