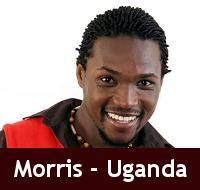 Like we told you the first time Morris was up for eviction (Morris in Serious Trouble) he also knew it and by 7:35pm (EAT) Morris was saying his last prayer in one of the rooms before Tawana interrupted his prayer session. He put the bible away and moved to the lounge. In the lounge Ricco and Munya came putting on shorts and T-shirts a clear indication that these two had discussed the swapping details with Tawana who is the current head of house. She told them that they had not been replaced…Otherwise there is no other way they would have got that confidence.
Five minutes to 8:00pm (EAT) Hazel and Thami were seated next to each other with Thami seeping his favorite drink Vodka. The show kicked off with Kalibrados from Angola with a boring track as seen from the revelers movements.
Parents:
Hazel’s brother Elton, Morris’ Dad Mr.Bigingo and Thami’s brother Neo were in South Africa to come back with the evicted housemate.
Head of House
The show crossed to the Head of house to reveal her decision to the other housemates but like mentioned before a certain section of the housemates had discussed this part of the game so even when Tawana said that she left Africa to take charge, Munya and Ricco were not moved an inch.
Mimi’s Eviction Party
The show crossed to Mimi’s eviction party who was dancing on a pole and TK’s welcome party with all the ladies saying “We love you TK”.
Status Recap
Biggie tries to bring in something new every time. Last time he brought in Fondom, the old man but this time he had a session on the evicted housemates starting with Latoya, Lucille, Uti, Sheila, Mimi and TK. They also showed the $ 100,000 hopefuls.
Eviction Time:
Hazel, Morris, and Thami……The next housemate to leave the Big Brother house is …..Morris. Big Brother asked Morris to leave the house immediately.
Who Nominated Morris?
How did Africa vote?
We’ll be back later with the nomination updates. It will not surprise us if all the housemates except the head of house are up for eviction.
Posted by: uowd AT 07:44 am   |  Permalink   |  Email
Tweet
Uganda Online Entertainment News