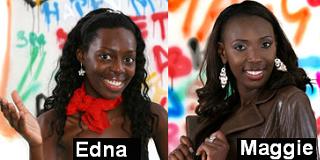 The revolution has kicked off with the male housemates discovering that they have twins in the house competing for the same prize. They have all along been dealing with Erastus and Edward thinking they are dealing with one person, but this is now history as the twins are both in the game.

The boys and girls have also been united and the house is now one with both male housemates and female housemates mixing. Meanwhile Angola's Edna and Maggie from Zambia were not that lucky to have a night in the house with the boys but at least they were better than Wayoe and Teddy because for them they got to hug the boys.