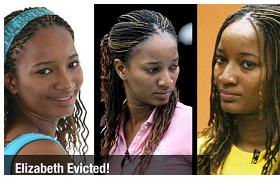 There is a way this game is tending towards Nigeria but it is still to early to judge with 8 housemates left after Elizabeth from Tanzania got evicted on 08.Nov.2009. Nigeria still has three housemates and looks like none of them is even making an effort to leave the house.

Elizabeth got 8 votes Emma 4 votes and Nkenna 3 votes implying that Elizabeth was the least popular according to Africa. Uganda was among those countries that voted for Elizabeth from Tanzania to leave the house.

Emma, Nkenna were all in tears after Elizabeth got evicted and of course Kevin was very sad after his comrade in arms, girl friend and until today lover left the Big Brother House. IK asked Elizabeth what she will miss most from the house and she said Kevin.

Elizabeth has confirmed that she is madly in love with Kevin from Nigeria and if her boyfriend back at home is not happy with how she has played the game and some one who looks like Kevin comes her way, she will straight on give it a shot.

Elizabeth left the house with USD 2,809 and another move that confirmed that Elizabeth was in love with Kevin was at the time of throwing her Molotov Cocktail. The Molotov cocktail was that one housemate will not hear from their beloved ones...everyone thought it would be Edward now that he had caused her leaving the house when he swapped her with Mzamo.

She took a deep breath as Edward told her "I love you Elizabeth" trying to bargain with her not to throw the molotov at him as he didn't want to be the one to miss hearing from the the dear ones. Elizabeth copied and she threw the Molotov at Kevin the one she loves. The reason is simple, she did not want Kevin to get in touch with his lover probably. She promised to deliver greeting messages to Kevin's sister's as she claimed that she had all their contacts.

Eight housemates are now left in the house of which three of them are from Nigeria. Elizabeth being evicted makes the end of the road for East Africa in the Big Brother Revolution. Last week Jeremy Ndirangu from Kenya left the house.