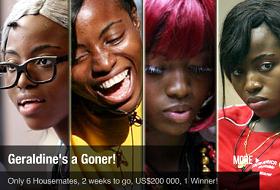 The show kicked off with Lizha James of the famous ''Nita Mukuma Kwini" Big Brother tune that always plays in the background as you watch your favorite artists on channel 198. She had some four booty shakers in form of queen dancers.

Geraldine from Nigeria got evicted on 22.Nov.2009 after she scored eleven votes against four votes for Angola's Emma. This was a perfect move by Africa now that Nigerians had proved to be a hard nut to crack.

With Geraldine out, two Nigerians are left leaving six housemates. If one more Nigerian could be removed in the coming week which appears to be the last before we go for the top 5 finalists in the week that follows.

The twin from Namibia, Edward has already made it to the finals as he is next week's head of house. This means he is immune to being nominated. Geraldine was quick at throwing the molotov cocktail at Itai. Geraldine hates Itai to beats in that when asked who she wanted out next week, she simply said Itai.

Geraldine also wants Kevin or Nkenna to win simply because they are all from Nigeria. She could however not get to terms with the fact that she had been evicted. She kept on crying as IK asked her questions. She did not leave empty handed as she had USD 2,804 to take with her.

The house is now left with two Nigerians(Nkenna and Kevin) hopefully one of them leaving next week before we have our top five. Mzamo from Malawi, Emma from Angola, Itai from Zimbabwe, Edward from Namibia are the other housemates still left in the house vying for the big prize.