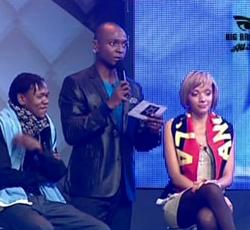 The evening started well with Maye Hunta who did his African Star before IK announced that 2 housemates would be leaving the house. This was followed by some group of guys who keep out of trouble by dancing.

IK started by calling Sheila who was not sure why they had called her name but being the eviction show it was she knew it was time to go. IK said she was safe followed by our boy Hannington who was also safe.

Jen, Yakob, Code followed in that order of being safe though for Code he was told to stand up sending his adrenaline levels way up high only to be told that he was safe too. Lerato, Mwisho, Sammy, Paloma and Meryl were equally booked on the flight for those who were safe for the night.

Twist of the Night
All the housemates whose names had been called were all safe but when it came to Kaone from Botswana; it was announced that he is the first housemate to leave Big Brother Africa All Stars. On coming out of the house, IK asked him what he had done wrong to warrant him an early exit, K1 said ''I don't Know" Meanwhile, in the house Jen was very bitter Kaone had been booted from the house.

Ugandan Comedian
The show crossed to Ugandan Comedian Daniel Omara who started off by saying: "Uganda we never go anywhere..".I'm not sure I heard the rest of the words but at some point he said he needed protection for some of the utterances he had made.

There  was another artiste whose name was close to Camaquin with a french cut and a painted face doing some drama act.

The Big Three
It had now become very complicated but like Biggie says, he has the right to change the rules of the game at any time. Half of the weak housemates were already safe leaving only 3 top dogs (Munya, Tatiana and Uti) who will even make it to the top three positions.

Tatiana is Head of House
The task for the audience to decide who leaves between Uti and Munya was already stressing so many viewers. The old rule is that the Head of House is immune from eviction so anyway we knew the second housemate had to come from Uti or Munya ...no please it was Tatiana.

Kaone and Tatiana back to the house
Kaone and Tatiana were convinced it was game over for them on the Big Brother game and it was time to meet their dear ones and probably get the next planes to Angola and Botswana. As they made their way off the stage, IK called them back. He later told them they were safe.

Jen was more than happy to see Kaone back as Munya could not help tight hugging Tatiana who had offered to massage him early in the week but turned down the offer.
Posted by: uowd AT 02:05 pm   |  Permalink   |  Email
Tweet
Uganda Online Entertainment News