Meryl and Mwisho Wrestle in the Sheets
Tuesday, August 03 2010 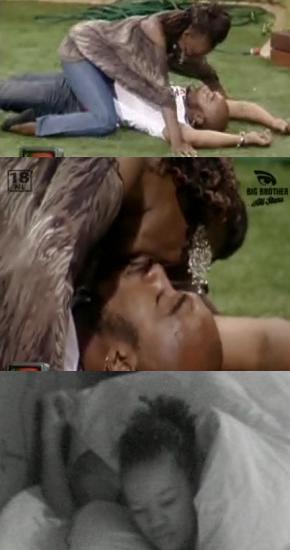 Tanzanian Housemate Mwisho spent yesterday evening talking about  how he would like to have many wives coupled with many children. Earlier on Meryl had told the other housemates how she had slept with 30 men but only dated 5. These two are a perfect match by virtue of that CV.

Having kissed passionately that evening that must have acted as a precursor to the wrestling that was witnessed later in the night. Namibia's Meryl and Mwisho went to bed and immediately giggles started.

Moments later you could hear heavy breathing from the sheets which breathing got heavier attracting Lerato who could not help laughing. Sheila was forced to tell Lerato to "shut up and sleep"


Meryl later uncovered herself feeling knackered after a lot had gone down. The pictures says it all.
Related: Mwisho Shows Meryl his Whooper
Posted by: uowd AT 12:41 pm   |  Permalink   |  Email
Tweet
Uganda Online Entertainment News