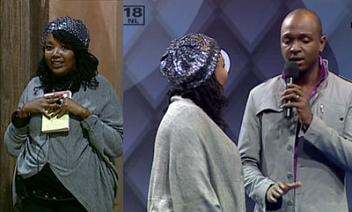 South African Housemate Lerato has been evicted from the Big Brother All stars. She was up for eviction with Munya from who survived the axe.

Tatiana was called upon as head of the house to reveal to fellow housemates who she had swapped with and she said Lerato.

Lerato simply said I’ts All Good. Meanwhile, in the House Yacob-Ethiopia was getting along with Lerato that her being evicted from the house just left him shaking his head in disbelief.

Sheila-Kenya broke down and cried like a baby when it turned out that Lerato had been evicted. This also served as an opportunity for her to get real close to Uti who she loves but has all along feared to tell him. Uti was a Gentleman as he took care of Sheila’s tears.

IK was very smart with Lerato because he did not hint at all at another life after the house. He simply told Lerato; you can now head home as the rest of us went for a commercial.

Hannington and Sammi were so excited on having another barnmate making the total number or real barnmates three. On opening the Barn, Lerato saw hens, a cow and was all in total shock. “OMG THERE ARE CHICKENS” she said.

Hannington hugged Lerato for over three minutes as Sammi patiently waited to have his turn. It looks like it was a deliberate move because out of the surprise visitors that the barn mates got, Sammy had a better deal because it was his Xgirlfriend that they brought to the barn and oh yes they had their time, so for Hanny this was pay back time.

We will monitor the situation closely and see how these three barnmates behave.